Home > Articles > THE SILENCE OF THE MEMBERS OF ATHLETES COMMISSION OF IRAN-NOC AGAINST THE DEATH OF NAVID AFKARI IS UNFORGIVABLE!

THE SILENCE OF THE MEMBERS OF ATHLETES COMMISSION OF IRAN-NOC AGAINST THE DEATH OF NAVID AFKARI IS UNFORGIVABLE! 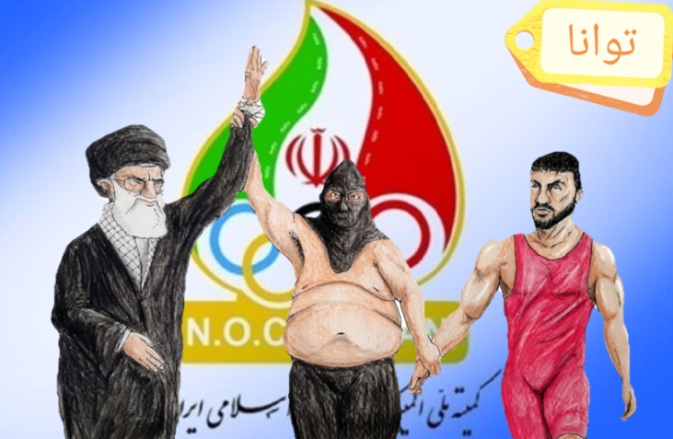 The silence of the members of athletes’ commission of Iran’s National Olympic Committee against the death of Navid Afkari is unforgivable.

Navid Afkari, the 27-year-old Iranian wrestler after undergoing two years of torture and threats was killed in the Islamic Republic of Iran’s prison. This was while many international pleads and campaigns against the verdict took place to no avail. Navid Afkari is not the first Iranian athlete that was hanged in protest to the Islamic regime’s policies. Many other Iranian national athletes have been sentenced to death by execution in the Islamic Republic’s prisons.

Today, the death of Navid Afkari has symbolized the fight against oppression and killings in Iran. In his leaked out audio recording in prison, he told the world that what he had learned in wrestling was not to bend against oppression and injustice. He also said that in all the years he wrestled, he had never competed with an unfair rival because wrestling is a sport with principles of fair play. He added that he and his family are struggling with the most unfair enemy of the human society at the present. He said; “I like the world to know that my whole aspiration was to become a wrestling champion and make my mother happy. But what can I do that I am being unjustly put in the regime’s noose of execution.”

People all around the world, reacted to the death of Navid Afkari. His name became twitter’s world trend, yet members of athletes’ commission of Iran’s National Olympic Committee remained indifferent towards this crime and opted for silence. This indifference is assessed as being in line with the Iranian regime’s policies, which could be investigated by the International Olympic Committee.

Why did the members of the athletes’ commission of Iran’s National Olympic Committee fail to perform their duty and didn’t become Navid Afkari’s voice?

The silence of all members of athletes’ commission of Iran’s National Olympic Committee together with impassiveness of Reza Amir Salehi the president of Iran-NOC and Alireza Dabir, the president of Iran Wrestling Federation sparked a wave of fury and rage among Iranians. Many believe that Iran’s sports serve the Islamic regime’s ideology and should not be allowed to participate in international arenas including the Olympic Games. The Iranian sports managers have a political and military background. They become appointed through fabricated elections and choose the coaches and athletes of the national teams and send them to world sports competitions as long as they are not opposed to the regime’s ideology. The standards of Iranian athletes becoming champions must also be in compliance with the ideology.

Arash Miresmaeili, the senior member of the athletes’ commission of the National Olympic Committee who’s also the president of Iran’s Judo federation is a good example. He was an athlete who avoided competing against an Israeli judoka by deliberately disqualifying himself. It is very clear that his compliance with the regime’s policies has promoted him to a post of presidency in the Iranian sports.

Such instances are not rare in Iranian sports. It’s been seen that Iranian athletes present their Olympic medals to the country’s leader to smooth their path to promotion or enjoy higher financial advantages of championship.

In January 2018 Reza Salehi Amiri was appointed as the president of Iran’s National Olympic Committee without any running competitors. His appointment was concurrent with the rise of Iranian women’s campaigns to gain rights to go to sports stadiums to watch football and volleyball games. The death of Sahar Khodayari later known as the Blue Girl happened during the leadership of Reza Salehi Amiri. The Blue Girl was indicted for illegal presence in the football stadium and sentenced to prison. In objection to discrimination against women she set herself on fire in front of the courthouse and later died in the hospital.

Immigration of athletes, sports coaches, referees and champions has also increased with added ideological and discriminatory pressures in recent years. Iranian sportsmen see their future contingent upon complying with the political and ideological desires of the president of the Olympic Committee or the heads of their national federations and those not in line with the regime’s ideologies, immigrate abroad. Kimia Alizadeh, the first Iranian female Olympic gold medalist in women’s taekwondo is one of these immigrants. Last year, she left Iran for good on political asylum to Germany. From now on she will be competing with the German flag. She was also a member of the athletes’ commission of Iran’s National Olympic Committee. Interestingly, Hadi Saei strongly reacted to Kimia Alizadeh’s defection.

Also, during the leadership of Salehi Amiri the old wound of Iranian sports opened up again, this time in Judo games. Saeid Molaei’s interview with the European press unveiled the Islamic Republic’s policies in the last 40 years in forbidding Iranian athletes to compete with Israeli counterparts. Reza Salehi’s objection to the head of the International Olympic Committee in a reaction by the International Judo Federation to the forced losing of Saeid Molaei remains in the archives. He had falsely claimed that Saeid Molaei did not deliberately lose the match.