Home > Articles > AND ONCE WE WERE TRADITIONAL

AND ONCE WE WERE TRADITIONAL 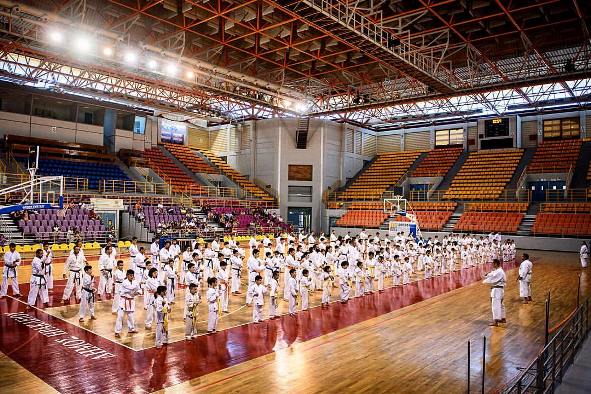 “The future of karate is in Western hands”. A bold statement by once WUKO Treasurer and karateka of the pioneer years of this world organization David Mitchell, (1982) cited in our 2009 book (“History, Sociology, Politics of the World Karate Federation & Eurokumite”). These words got many in the East irate. What did he mean and we understand by this?  In one word “modernization” of traditional karate fighting techniques and an open mind, as it spread from Japan to Europe. As we say in our book, karate the art of empty-hand fighting, in crossing national boundaries from her origin as kalaripayat in South India, experienced basic transformation in techniques. From the animal forms of fighting inherited from Indian Buddhist monks, across the Himalayan divide in Hunan/China, the Shaolin temple developed this into more of a science of fighting, while keeping intact the Indo-Buddhist spiritual base. From China, Okinawan traders cum martial arts students took it home on a big scale, especially in the eighteenth century. In Okinawa classical karate with Chinese tradition flourished, distinct from her Indian roots. From here adventurous Okinawan karate masters pioneered her spread up north to Japan, to eventually create the genesis of the major styles we have come to know of today as Shotokan, Shitoryu, Gojuryu and some others. From Japan, karate was taken to the West/America via the Pacific through Hawaii (Chojun Miyagi of Gojuryu fame spent many years here) before WW2, and much later in the early 1960s directly to Europe.  This is merely a summation of a larger karate history for our purposes here.

The competitive nature of Westerners, soon led to the formation of a global organization for all-style competitions representing national federations, which now goes by the name of the WKF. The vanguard of this first all-style world organization was the European karate movement led by the European Karate Federation/EKF. As Europe is a small continent, every other country is a “neighbor” and literally within driving distance. So cultural exchange through sporting competitions flowered here like no other place in the world, and with this modern sports karate evolved to even newer and higher form of fighting techniques. The essentially “gyaku-zuki” tournaments of Japan, her ardent followers abroad and even the early WKF (then known as WUKO) tournaments was soon transformed by European fighters, into a kumite that was more free-flowing and full of fakes and feints before the final blow is executed. This veritable “revolution” in traditional kumite was born at the 2nd world championships of Paris in 1972, where the mighty Japanese team of Shotokan greats like Abe and Oishi were defeated in the quarter-finals of team kumite by then unknown “English lads” of later fame such as Ticky Donovan and Billy Higgins y al.  Multi-directional movement of the feet combined with body and head feints (the fighting styles of Egea/Spain in late 1980s; Biamonti/France in mid 1990s and up; Aghaev/Azerbaijan from 2000 to now, comes to mind foremost) became essential components of the elite fighters of the WKF movement of karate, which is after all the single organization/karate movement representing karate in the IOC. As pioneers Europeans soon mastered this neo-kumite of constant movement, to dominate the world karate kumite scene since 1972. When Eastern Europe opened up politically in 1990, such fighting talent flowed from West to the “new” nations of the East, to quickly increase the total European pool of talent in the new techniques, especially from Russia and the former Yugoslavia (Serbia and Croatia). Since the 2nd world championships of Paris in 1972, European fighters have dominated the kumite scene and increasingly also in kata. So the last place to receive karate was also the best place for sports karate’s transformation as a modern fighting art, because of the climate of open minds to experiment with new techniques, and the plethora of well-organized tournaments open to people of all styles of karate, even personal ones.

On a personal note, I came to pursue graduate studies at Sorbonne University of Paris in 1968 with a shodan in traditional shitoryu karate. I was quickly exposed to early forms of this new revolution in kumite techniques practiced by some, absorbed it in a hurry and have never looked back. In time, I was able to mix the “old” and the “new” to create a comfortable blend that served those who wanted to be involved in the competitions of sports karate a la WKF as well as the majority of others who are happy with karate for exercise and self-defense purposes. While I have been the coach of 3 national teams in WKF competitions, it is this mix that I am most proud of which serves both clients. “There is only one kind of kick & punch, a good one”, except that in sports competitions, to avoid serious injury the rules discourage facial contact, excessive body blows and wild uncontrolled techniques of hands and feet that invite serious injury.

In no way do I intend to insult “traditional” kumite techniques because the one will never have seen the light of day without the other. Modern kumite of multi-directional motion a la WKF is merely the logical conclusion of all that came before in a long history that began in India, was brought to China and then  taken to Okinawa and Japan. My only reservation is when die-hard traditionalists become fanatics rejecting all change and some even sports karate. The truth of the matter is sports karate is big, brings people together promoting innovations and friendship through exchange, whereas traditional style-based karate tends to isolate and divide. It is difficult to deny that “sports karate has brought more innovations to kumite in 50 years, what traditional karate has failed to do so in centuries”. I also do not understand when some look East and give full praise to Japan and Okinawa for giving us karate, when these two were merely “recent” recipients of a much older art that was “born” in India, refined in China and given to Okinawa/Japan and the West as “presents”. So if you have to look East to express gratitude to karate history, you must look far enough to include China and India for this.  I also take issue with what is defended as “traditional” by some to suit a hidden agenda, justifying undemocratic protocols and other related practices, fit for a different time. Look at recent successions to sokeship in major styles, where to keep it in the family, seniority requirements of tradition have clearly been violated or re-interpreted. Sokes are now younger than ever and involved in the up-grading of their seniors. Discontent over this is a major cause of break-ups within styles. This is not necessarily a bad thing, as it creates greater choice, competition and progress. While some tradition is to be respected, others are best discarded. The bottom line these days is that in traditional karate, tradition is only upheld when it suits the group and/or individual.  If you wish to read more on this and related issues, it is dealt with at length in our book of 2009, “History, Sociology, Politics of the World Karate Federation & Eurokumite”. By Dr. Ravee Raghavan & Borut Markosek.