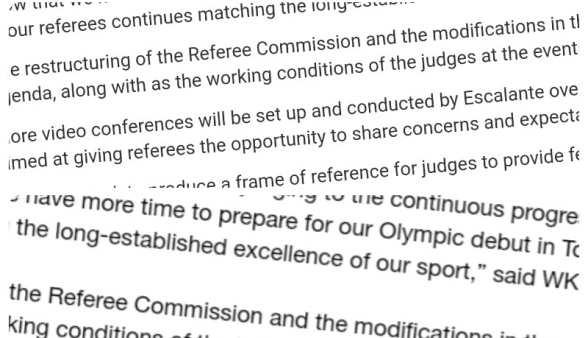 Sports news agencies reported on Thursday July 16, of the WKF Referee Commission meeting via video conference. Although the presence of Antonio Espinos, WKF renowned president had been announced but nothing was reported on the objectives and results of this meeting.

Since WKF is known and criticized for repeat structural revamping of referee evaluation systems, it was assumed that such modifications would be among the agenda topics but what leaked out of this meeting was the collective resignation of members instigated by Javier Escalante, the head of the commission that once again turned all eyes toward the complexities within the management of Espinos. What came out of this video conference in the first place involved the resignation of three of highest rank members inducing Escalante, Hamara and Madani. It is said that all remaining members also turned in their resignations in a coordinated effort with Escalante via emails.

The long term presence of experienced referees from France, Italy, Japan, Turkey and Morocco in the WKF referee Commission had already tightened the noose on Antonio Espinos than ever for any changes in the WKF, therefore, Espinos embarked on a move to maintain himself as WKF’s uncontested president.

A source in WKF who did not wish his name mentioned in the reports said to SportsEmic that Escalante on order by Espinos had discussed the collective resignation plan with all members asking them to resign. He also added that with the walking away of all members from the commission, Escalante together with Hamara, Madani took back their resignations and returned to their post again.