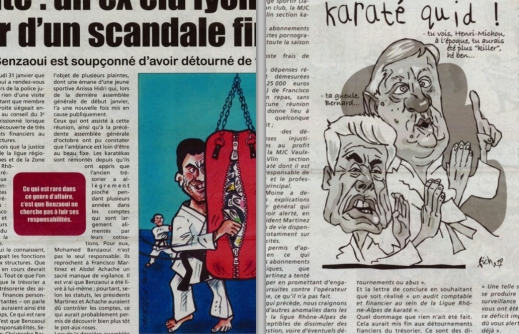 Mohamed Benzaoui, former treasurer of the regional league Auvergne-Rhône-Alpes within the interdepartmental zone Rhône-Alpes, is to be tried on 01 April, following a financial scandal within the two structures still under investigation. Benzaoui, himself a member of the region’s executive board under the French Karate Federation (FFK), was suspected of embezzlement of over 200,000 euros which were originally destined to local sports associations within the region.

According to his lawyer Jean-Cristophe Basson-Larbi, Benzaoui acknowledges his responsibility in the scandal and is willing to reimburse all of the money which was lost. It was also specified that Benzaoui was almost alone in managing the entirety of the funds: he had repeatedly asked his superiors for assistance, but to no avail.

Indeed, as the scandal unfolded, many karateka have especially held Francisco Martinez (president of the regional league) and Abdel Achache responsible for this scandal, as they reproached that both of them had demonstrated a severe “lack of vigilance” and should have been observing Benzaoui more carefully. Several people have even expressed their contempt for Martinez via the website Le Karaté met son gilet jaune.

Moreover, Francis Didier, president of the FFK since 2001, addressed the scandal via two letters sent to Martinez and Achache, also emphasising their responsibility for the scandal. The first letter reports that the embezzlement began in September 2017 and was only discovered in September 2018. The second one points more directly to the responsibility of Martinez and Achache, stating that they were not in any position to assign tasks to the treasurer without exerting some level of control. Didier further mentioned in his report that funding of the two structures has thereby been suspended, while the federation continues its investigations on the case.