Home > Interviews > TAEKWONDO HAS DEFINITELY BENEFITTED FROM BEING AN OLYMPIC SPORT

TAEKWONDO HAS DEFINITELY BENEFITTED FROM BEING AN OLYMPIC SPORT 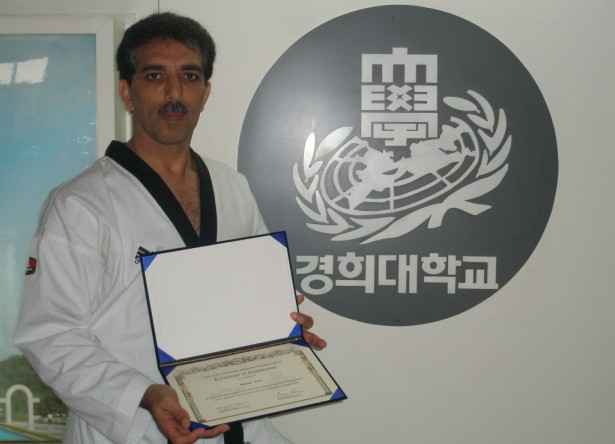 After the 2008 Beijing Olympics, the World Taekwondo Federation (WTF) introduced a series of electronic systems to register points scored in WTF bouts. However, many masters of the discipline argue that such a system creates a boring martial art that resembles ‘foot fencing’, rather than the dramatic and theatrical kicks that were needed to attract the attention of judges in the 1980s and 90s.
Currently, the future of the WTF is unknown; empty seats and unattractive performances at Taekwondo events in the Rio Olympics encouraged us to get in touch with seventh Dan instructor Master Ailpour in his dojang in north London. We asked him some questions relating to the history and future of Taekwondo.
Master Alipour, thanks for speaking with Sportsemic.
Let’s start with Rio 2016. How would you say the GB taekwondo team performed at the Games?

If we want to discuss GB Taekwondo we must discuss 2 separate moments in time; before the London 2012 Olympics and after.

Before 2012, the GB team had singled out stars, so that only 1 or 2 of them really progressed. After 2012, they spent a lot of time and effort to ensure a stronger team, rather than a stronger group of individuals. In 2016 they displayed a good team.

Judo and Taekwondo are two of the Asian martial arts included on the Olympic programme. Taekwondo made its debut as a demonstration Olympic sport at the 1988 Seoul Games, and became an official medal sport at the 2000 Sydney Games. Do you think taekwondo has benefitted from becoming an Olympic sport?

Taekwondo has definitely benefitted from being an Olympic sport, as the media will cover Olympic sports more, and a wider audience will become familiar with these sports. Thereby the number of students will increase, as can be seen in Taekwondo since its introduction into the Olympics in 2000.

There are many taekwondo coaches who don’t completely agree with how the sport is conducted at the Olympics. Some think the direction of the WTF is not consistent with the ideas of taekwondo. Would you say this is the case, and what are your thoughts?

The problem is not with Taekwondo and the philosophies it holds. The issue lies with the fact that the leaders of various relevant federation want to keep Taekwondo in the Olympics by any means necessary, and at any cost to the sport. That’s why they have taken the rules and regulations in changing directions, solely to ensure that it remains a creditable Olympic sport. Unfortunately there are some coaches who only teach their students and fighters how to get points. By disregarding all the other aspects of Taekwondo in the pursuit of point fighting, they have created a large space between what is real Taekwondo and what the public sees.

Taekwondo gained a negative reputation after the 2008 Beijing Games; in light of this, how would you rate the sport as a whole at the Rio Games?

We return to what we discussed already; the method of scoring and judging. Since they changed these things, most Taekwondo fights have lost their beauty and technique. The players only try to take advantage of the electronic system, by any means necessary. This is why we sometimes see techniques that aren’t even part of Taekwondo as a system; new kicks made solely to gain points, with no practical application. For this reason, Taekwondo fights have lost their beauty.

Do you think taekwondo would benefit from an electric scoring system?

The system is currently electronic. Before this system was put into place, we had 40 world championships. Korea won in every single championship, all 40 of them. Coincidentally, or perhaps not, the matches used referees of Korean descent, but based in different countries. For example, a Korean referee could control a match between Korea and another country, based on the fact that he lived in America, and was therefore deemed a US referee instead. This gave out many biased and unfair matches based on loyalty of the referee to their country. The very first year that the electronic system was introduced, Korea lost it’s 40 year old reigning victory. We can conclude that the electronic system helps to eliminate some degree of referee bias.

As you come from Iran, could you comment on the state of taekwondo in your country? And were you impressed with the Iranian performance at the Games?

Iranian Taekwondo is one of the best powers of Taekwondo in the world, both in Fighting and Poomsae (forms). Currently there are over 1 Million students of Taekwondo in Iran, which would give a great potential to anyone. However, in Rio they did not perform well, where the blame lies with the management of the team.

Similarly, Azerbaijan was led by an Iranian coach; what did you make of their Olympics?

Azerbaijan performed well, because they used the potential that Iran possesses; both their coach and one of their player was Iranian. Their strategy toward fighting was well-founded too; they reduced the anxiety of the fighters and brought down their stress levels, instead of overtraining and doing the opposite. This is why Azerbaijan only got 1 Gold medal in all of the Rio Olympics and it was in Taekwondo. We can say that, with the coaching methods, and the actual nationality of the coach and some players, Azerbaijan’s Taekwondo is one that flows from Iran’s Taekwondo, and that surpassed Iran in this Olympic Games.