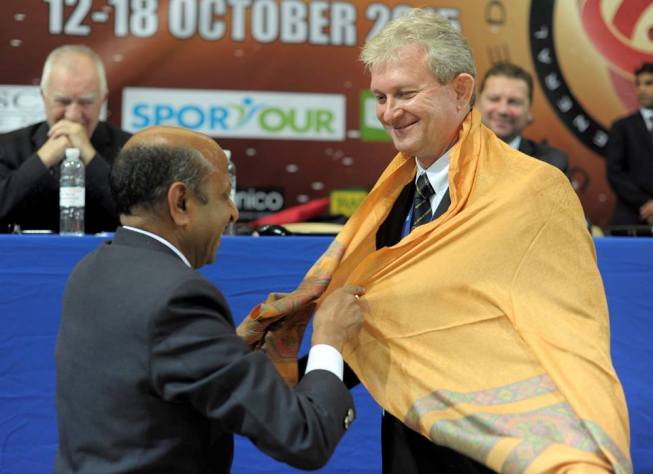 Professor Liviu Crisan, President of the World Union of Karate Federations reacted to the decision of the IOC Executive Board.

The Executive Board of the International Olympic Committee (IOC) has supported the package of the 2020 Tokyo organisers, and sports such as sports climbing, skateboarding,surfing, karate and baseball/softball now only require the approval of individual Olympic members in August. Yet according to news from skateboarding sources, the three world governing bodies are questioning whether they will be involved in the 2020 Games.

Professor Liviu Crisan, President of the World Union of Karate Federations reacted to the decision of the IOC Executive Board, insisting that the World Karate Federation’s (WKF) representation of karate must be debated in European Union Court, as it is not the only world sport karate organisation. Simultaneously, President of United World Karate (UWK), Richard Jorgensen, published a statement saying that UWK had appealed to a Swiss court on Monday 30th May; as UWK president he feels he is acting for unification and to defend karate practitioners from IOC discrimination and misrepresentation.
Read UWK statement here.
UNITED WORLD KARATE FIGHTS FOR FINAL UNIFICATION OF KARATE SPORT BEFORE ITS INCLUSION IN THE PROGRAMME OF THE OLYMPIC GAMES

In 2015, the UWK contacted the World Karate Federation (WKF) and the International Olympic Committee (IOC) in order to revive the unification process within the world of Karate, which was abandoned years ago following the recognition of the WKF by the IOC, contrary to the commitment of the IOC to unify all Karate disciplines prior to the inclusion of the sport in the Olympic movement.

In light of failed recent discussions and knowing that Karate, as practiced under WKF, could be included in the Programme of the Olympic Games, the UWK has filed, on 30 May 2016, a request for provisional measures before the Swiss civil Courts in order to force the IOC to intervene to achieve unification, and thus put an end to a long lasting discrimination against most of the karate athletes in the world.

IOC’s Executive Board decision of today to propose the inclusion of five new sports in the Programme of the Tokyo 2020 Olympic Games is of great concerns to the UWK.

The UWK considers that unification shall be achieved before any decision on the inclusion of the sport in the Programme of the Olympic Games. The final decision in this regard will be taken in August 2016 during the 129th Session of the IOC in Rio de Janeiro, Brazil.

A court hearing on the above dispute is scheduled on 19 July 2016 in Lausanne, Switzerland.